Ahoy Pathfinders!
Conch here, bringing the latest edition of Atlas Community Q&A with the Devs! While murky waters and stormy seas may alter the exact timelines in the future, the Atlas crew will continue to provide more engagement opportunities during the off-weeks between patches. It may be through Q&A or may be a fun community event or two, but like a pesky barnacle on your broadside, we'll be making it tough to leave us in the wake. 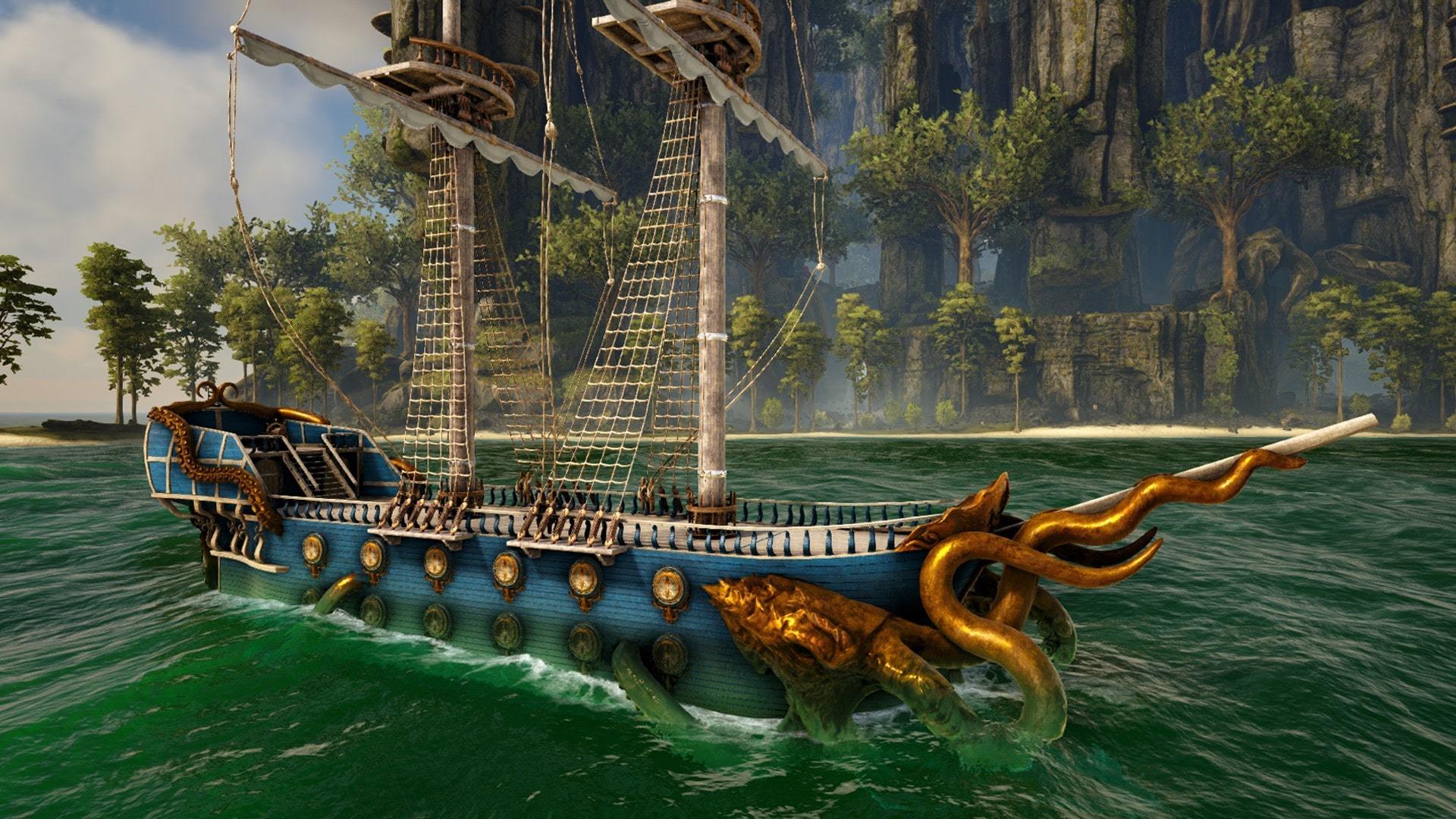 Hmm? This seems familiar. How does it go? Release the... something something?
Well, thanks to my parrot postal friend, this image just landed on my shore. Apparently, she was recently spotted out in the deep sea, headin' our way! She's definitely a beauty... so, can anyone spare a coin or two so I can take her for a test sail? Shells don’t get a lot of loot these days.

As a reminder, before we get into Q&A, with all the new features we provide, there is also significant development going on with optimization and maintenance of the current game. Again, these teams work in tandem and you can expect the major patches with overhauls or additions to some of the major gameplay components to come in due time. Meanwhile, to make sure our fellow pathfinders don't feel like they're overboard without a life preserver, we'll be releasing additional smaller content continuously until the big items we’re working on are ready to set sail.
The ships to a better ATLAS have already charted their course and shoved off, but until then, doesn't mean we can't take a ride on a dolphin or seahorse and enjoy the voyage.

Without further ado, here’s our Q&A! Hang out at our Discord for a chance to get your questions answered in the next Q&A!

Does the dev team have any thoughts on merging EU and NA pvp or maybe merging all of the servers to make 1 big megamap?
Yeah. We understand that this would be a lot of fun from the perspective of increasing the populations, but we're not ready to do this yet for two reasons:
1. We are concerned about lag when people are playing in distant servers (we locate the servers near where people are playing, so EU servers are in EU and any NA players going to those servers would suffer more lag).
2. There would always be a time when roughly half the population would be sleeping and thus easy pickings. Overall, we think that this will add to frustration until we have implemented ways of players protecting their stuff when offline.

Have you thought about making less planks needed on the lowest layer of ship building?
Yes. The new ship system will handle this much better once it rolls out.

How does the team feel about setting minimum stat values for blueprints at each rarity and adjusting the maximums, so that 300% cannons as an example cannot exist and so mythical blueprints that are no better than common ones don’t exist either?
There is a huge balance pass in progress for blueprints right now. Please let us know what you think once it's done.

Are there any plans to reduce stun duration with shield bash or even use a diminish return so it isn't an indefinite lockdown?
Yes. There is a lot about combat that really bothers us and stun locking is number one. It's on the list.

Are there any plans for more "old style" ships to be released (build from frame up ones) or will all future ones at this point be prebuilt?
The new system contemplates a more modular design that isn't as intricate as the old system and isn't "prebuilt". For now they are as we work on the system, but ultimately it will be a modular system that allows you to swap components and create ships with different functions without allowing for the crazy exploits that the current system permits. It will also be more performant which should improve frame rate.

Any plans for bigger structures, like sea-walls/gates? So there's less need of overbuild harbours with thousands of structures?
Absolutely. We have this on our radar and will be looking into it as soon as time allows. We hear you.

When can we expect more pvp balances to come?
It would be great if players could provide a detailed list of changes they would like to see in the Discord channel. We have a long list of things we're fixing from the old team and putting a complete and forward thinking list up in the discord channel is the single best way to be heard. This goes out to all our players, not just Official PVP. :) (For example, last week’s survey was based on a compiled list of player concerns)

When will the SoTD loot table be fixed? Also the instant/infinite respawn of Sea Fort tax banks? Will there be some tweaks also to the market/warehouse/farmhouse structures to limit companies from spamming them so that new/returning players can have a chance to get their markets up?
Consider them all added to the list. Cheers!

Will we see a new bossfight anytime soon?
Not for a while. We have to fix all the broken stuff and introduce new features first. In general, Bossfights didn't work well and were easily exploited.

Will Seahorses and Dolphins eventually be able to follow behind ships?
Yes. We are also looking into having them pull ships for speed and maneuverability.

Any update on tradewinds?
They are coming. :). We are still working on them and they should be here at the end of Q2 beginning of Q3. It might be sooner but don't want to promise it sooner than that.

Any ETA on some bug fixing and stability patches?
We run patches roughly every 2 weeks. There are a number of fixes associated with each patch so we are doing this constantly. If your particular issue isn't being surfaced, please join our discord and let it be known there.

Again, we would like to emphasize that ATLAS is still in Early Access, meaning many things can and will likely continue to drastically change - even in the middle of development. Anything discussed is only up to date as of the moment it is posted. Features and changes that ultimately make it to the next patch, as well as timing, may be different from what was previously discussed.
As always, we appreciate the suggestions and feedback from the community. Please keep them coming! Thank you for all of your support! :)