Mega-Update 1.5 is now LIVE! A whole new world of adventure awaits you! 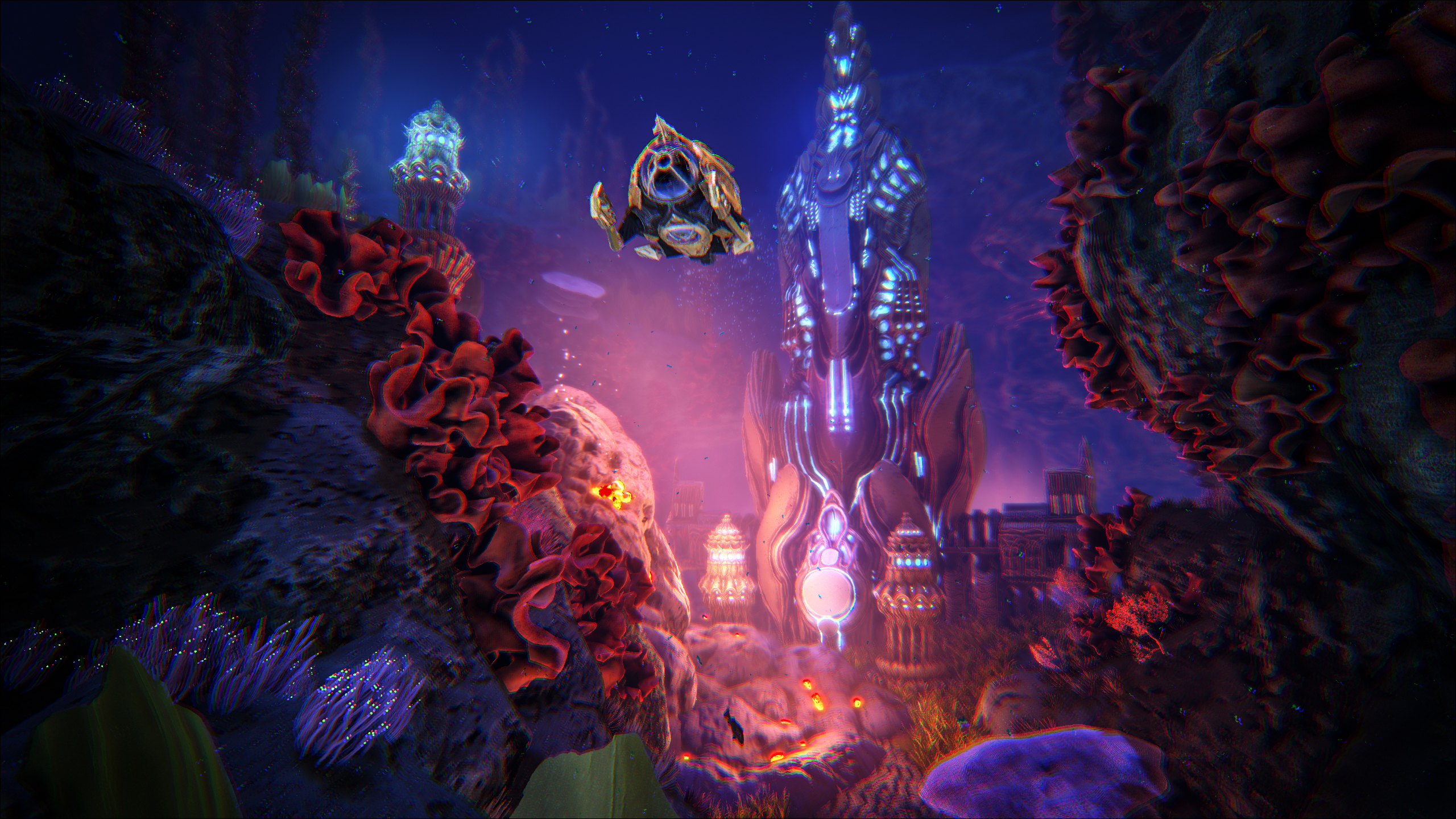 ATLAS 1.5 has arrived! ATLAS has been revised and re-envisioned in this Mega-Update 1.5, which is the culmination of 3 months of live feedback from players since launch! We know that this update has taken quite some time and we really appreciate everyone’s patience as we got out feet wet redesigning the claiming system, expanding the map, and getting all the content ready. As a team, this has been one of the largest updates we have ever worked on and we’re incredibly excited to get it out to you. We believe with these changes, ATLAS has come a long way and we’re going to continue to remain dedicated to the game, bringing you more major updates a monthly basis, which will include more content such as new items, weapons, creatures and new areas for players to check out!

And now here’s what you can expect with ATLAS 1.5!

Claim System Changes & Official Servers
With this update, we’ll be launching 4 fresh Official Networks to represent 3 different game modes, each with a unique claim system. We want to give you the choice to choose the mode which best represents your playstyle.

Colonies PvP: Freeform building, with more progress-protecting and time-enforced PvP rules creating a cooperative atmosphere, and limits to ensure the game is more oriented towards single players and small to mid-sized groups. We’ll have two official networks available for this mode, one in Europe and one in North America.

Empires PvP: This is our previous PvP mode. There are no limits on claim flags, and company sizes are at a maximum. We’ll have one Official Network in North America where players can fight it out to determine which Empire holds control of the ATLAS.

PvE: This will be based on our Colonies mode, with the PvP specific elements disabled. There will also be additional limits on companies in terms of how many islands they can own based on how large they are. We’ll initially be launching one network hosted in Europe, with another North American network to follow in a few weeks (the hardware is currently being prepared!). 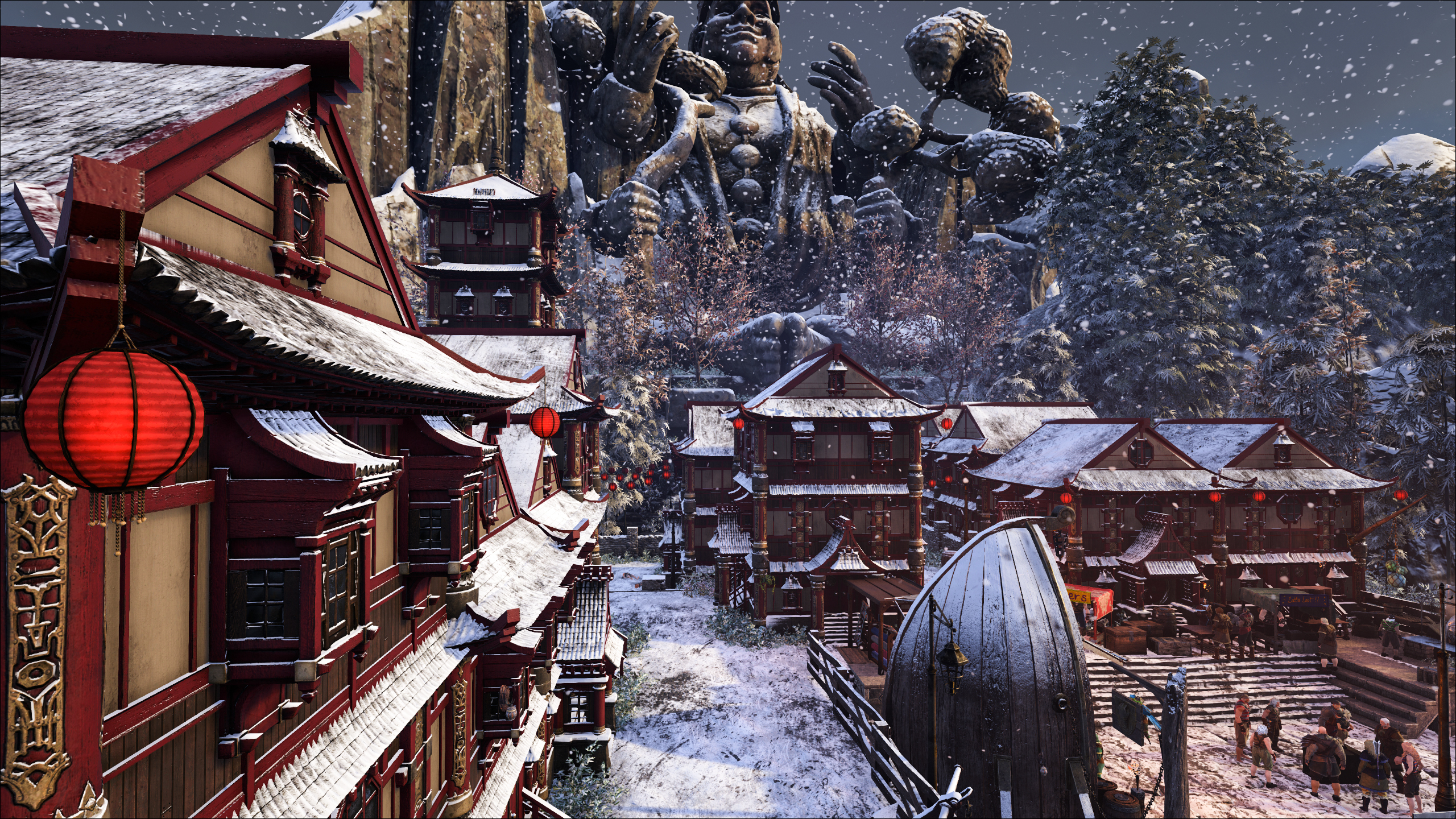 Jump aboard and explore a greatly expanded World Map with new islands and regions ready to be plundered! 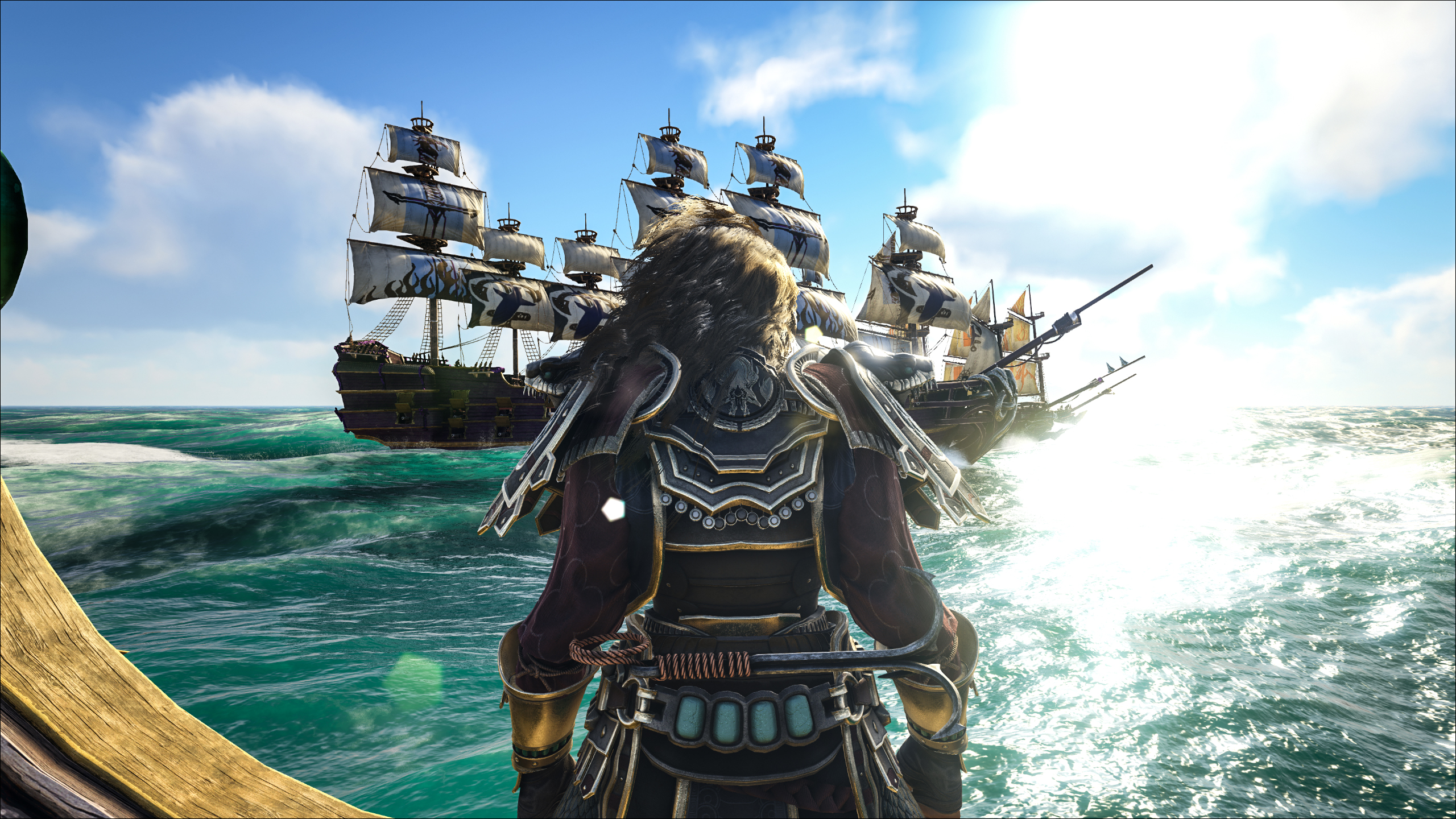 With this update, The ATLAS world now has 40% more islands and unique land masses to grab as your own, along with a new biome and world map layout to explore. 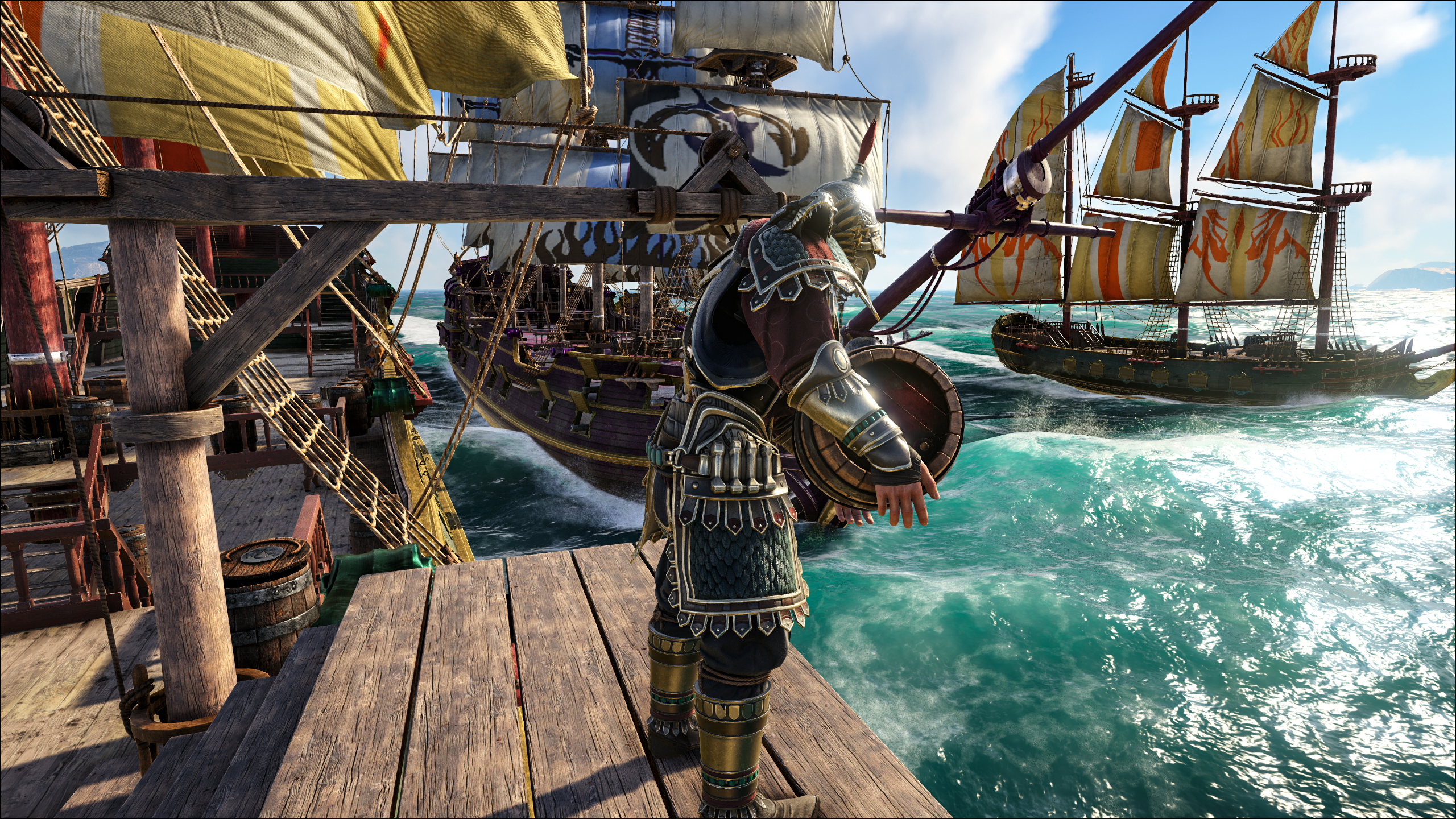 Take an explosive foray into new missions and quest lines and uncover the depths of ATLAS with new mechanics and items!

Take a deep dive into new underwater content and explore the depths of the deepest ocean trenches in the brand-new Submarine, but be on the lookout as the ruins are guarded by powerful underwater creatures and are home to the Giant Crab! 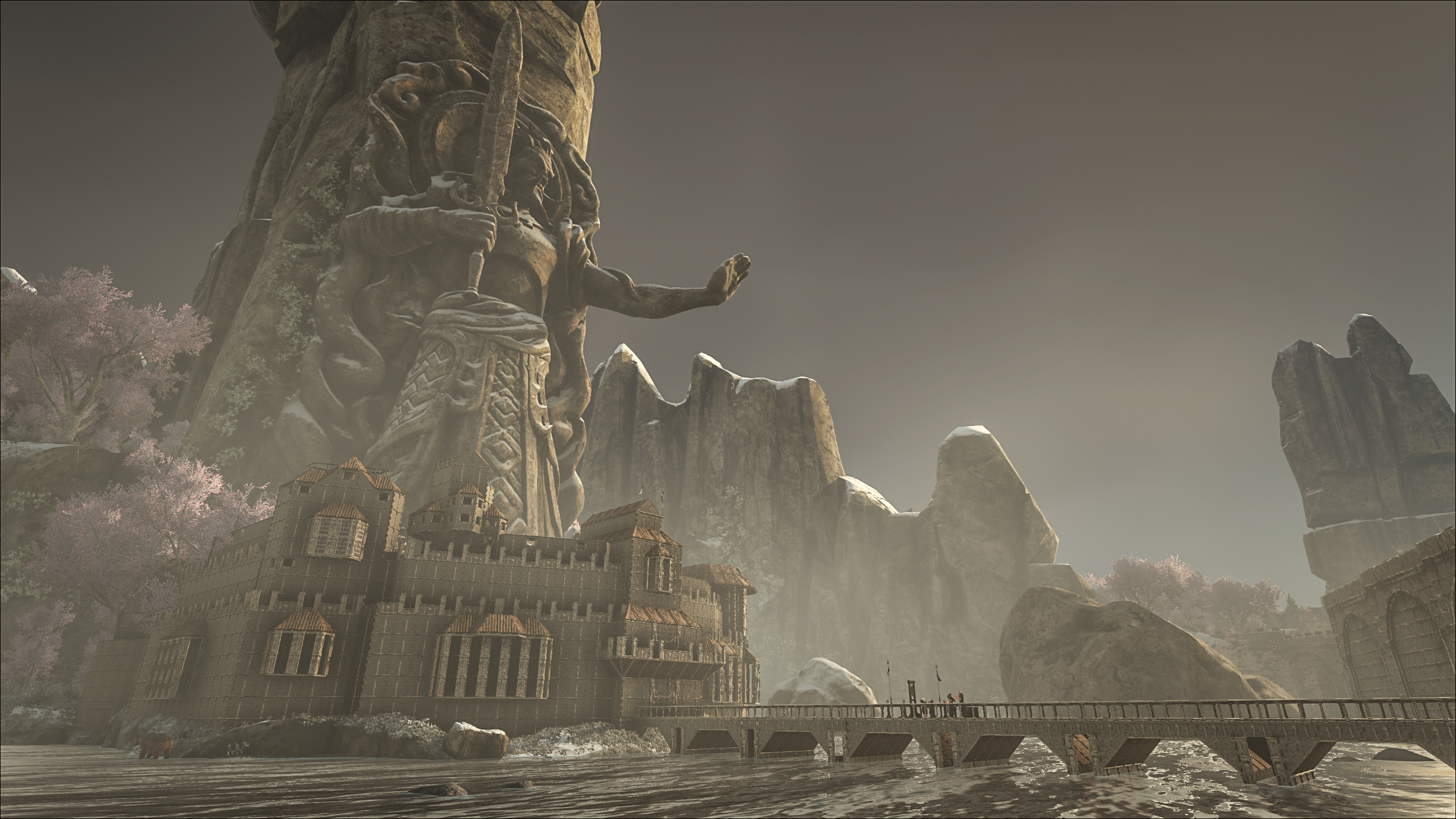 Express your creativity via our expanded building system, with new structure pieces to bolster your battlements! 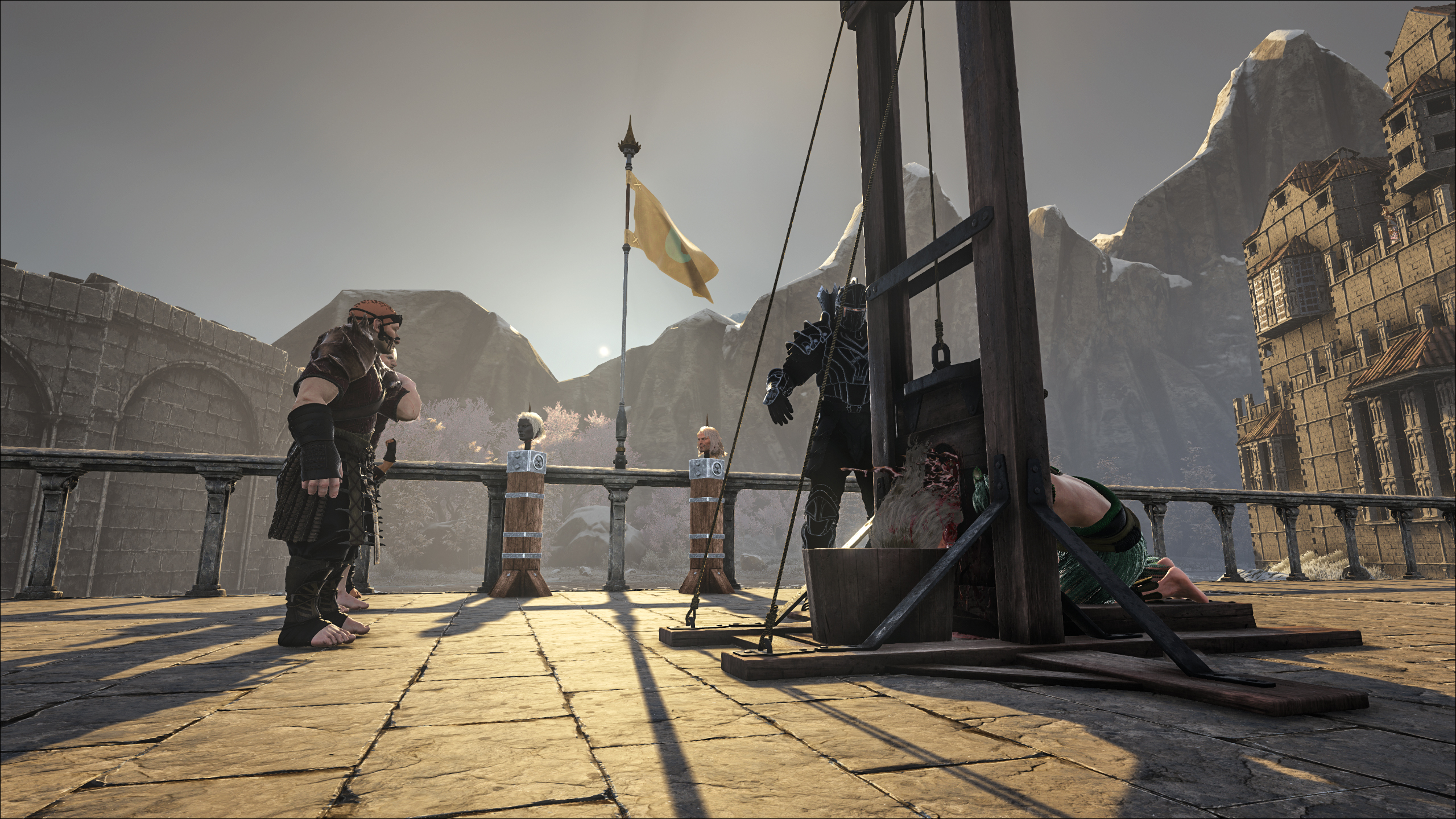 Immortalize your enemies via the thoughtful process of converting their heads into mementos to adorn the perimeters of your Company's lands. 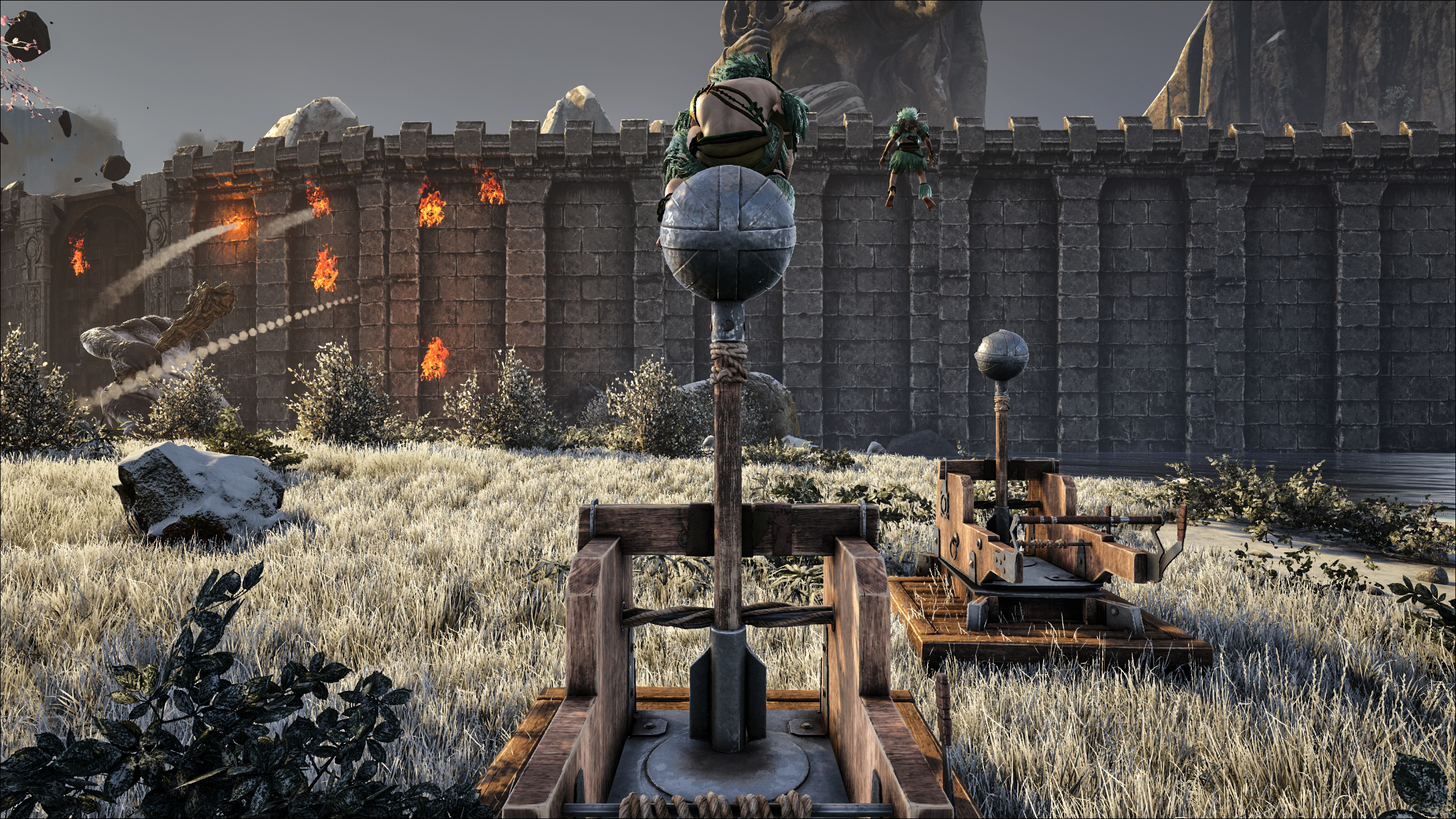 Catapult yourself into new raiding strategies and let loose the savage in you (and perhaps the contents of your stomach as you become airborne). 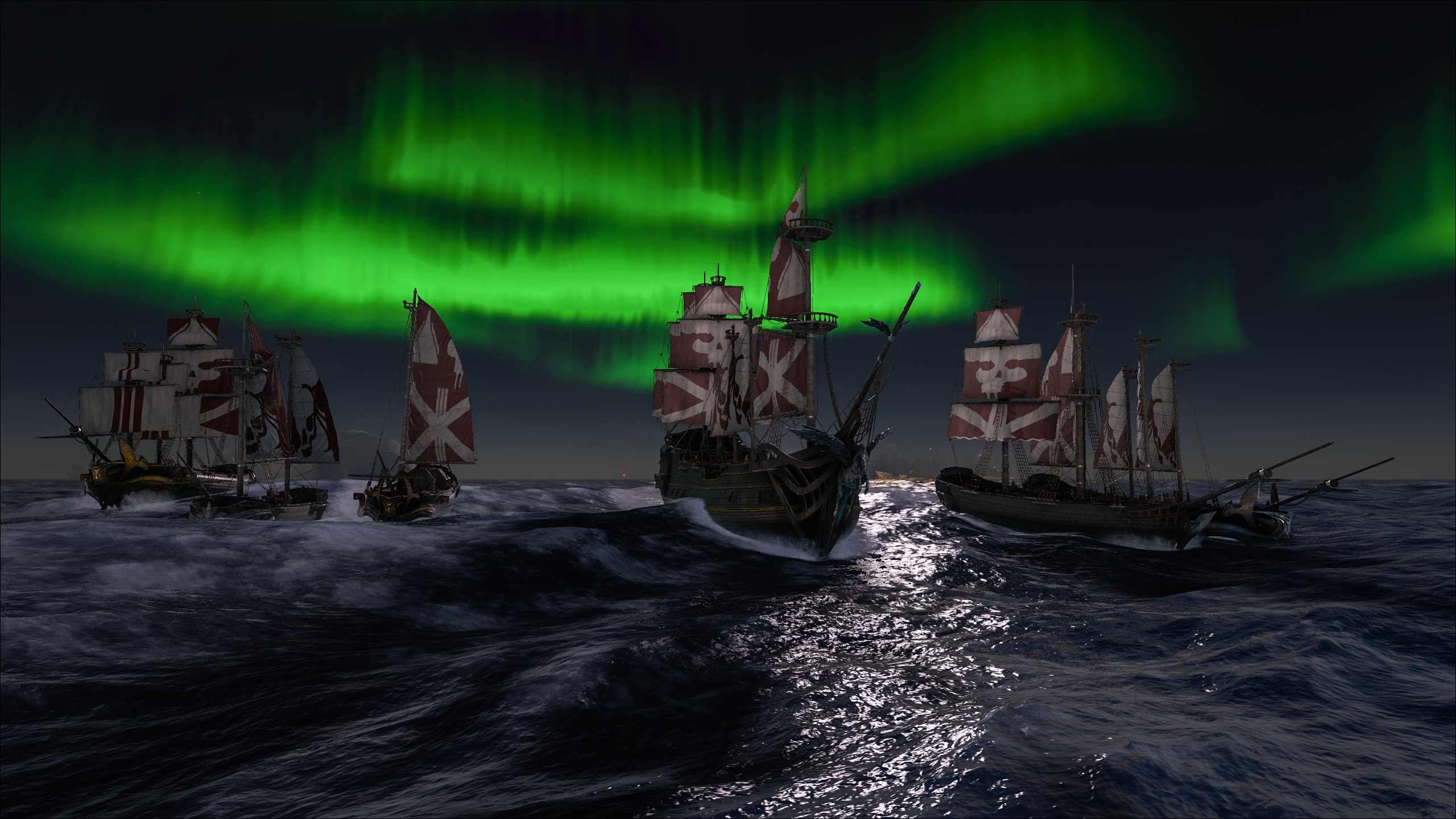 Form a fleet and traverse vast expanses of ocean beneath the guiding light of the Aurora Borealis dancing on the horizon and reap the extra bounties she grants. 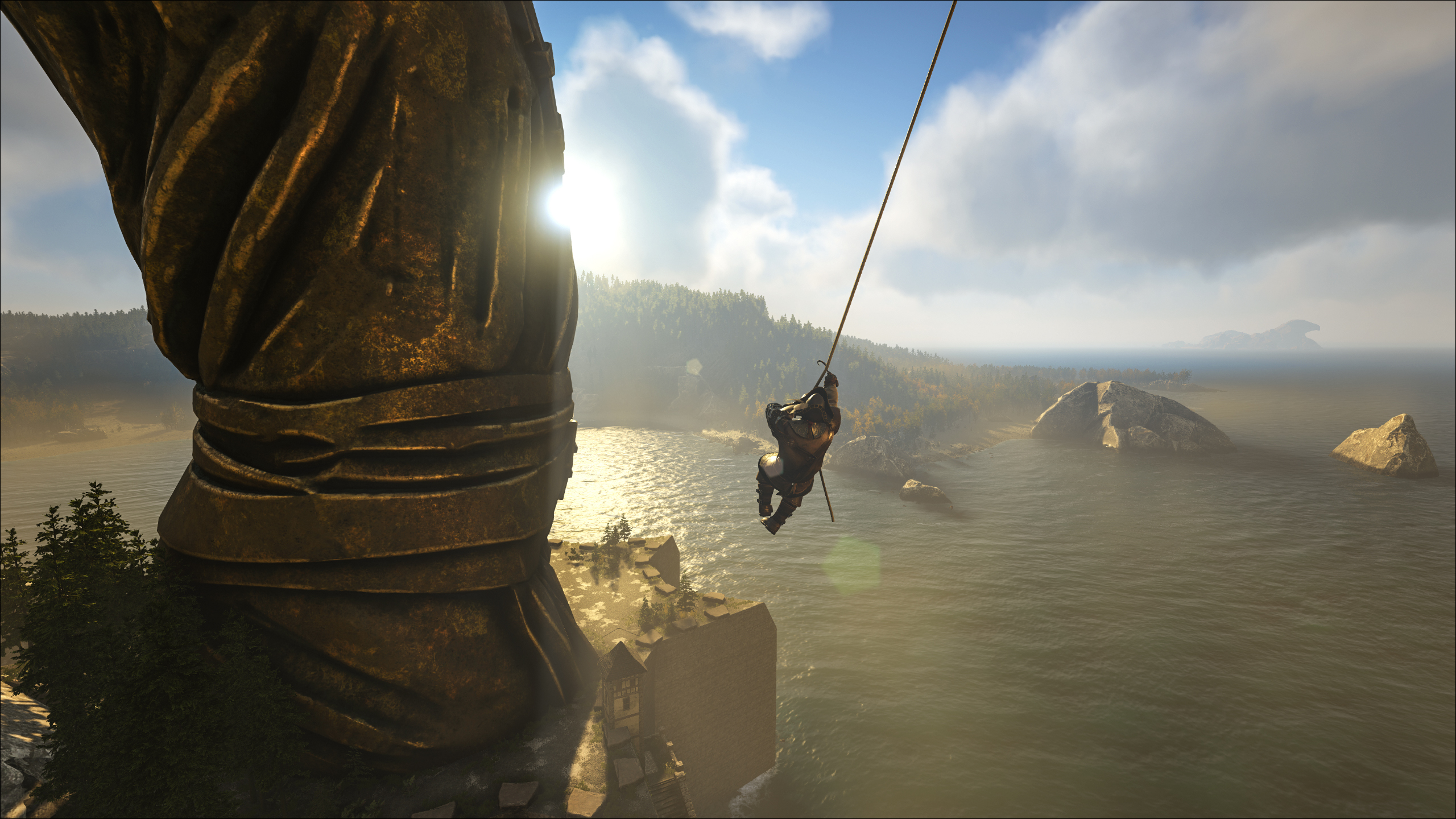 Try your hand swinging across mountains with the new physical grappling mechanics. A whole new world of adventure awaits you!

- Redesign: ATLAS World - 40% more islands/landmass & new world map layout.
- Redesign: Claim System - Colonies: Freeform building, with more progress-protecting and time-enforced PvP rules creating a cooperative atmosphere, and limits to ensure the game is more oriented towards single players or smaller groups. Previous mode now known as Empires and PvE will be a modified version of colonies.
- New Environment: Deep Ocean Trench. A new area to explore, guarded by powerful underwater creatures and home to the new Giant Crab
- New Environment: Eastern Tundra now has its own visual design, no longer using the Western Tundra style
- New Weather: 'Snow' weather systems for Polar and Tundra
- New World Phenomenon: Aurora Borealis light display which will result in a harvesting bonus, visible in particular regions.
- New Vehicle: Submarine. Explore the depths of the ocean in this small scouting submarine. Use the claw arms to help harvest the ocean floor and explore (demolish) player shipwrecks. Also equipped with a harpoon (uses ballista bolts) as a new underwater weapon which will ramp up oceanic combat.
- New Creature: Giant Crab. It can carry heavy loads, along with players, tames and wild creatures
- New Item: "Guillotine". Hanging your foes in a noose taking too long? Off with their heads!
- New Item: "Large Wall". Equipped with parapets and ladder snaps so you can now build a proper defensive perimeter!
- New Item: "Small Gates". 2-wall high gate structures for wood and stone.
- New Item: "Player Shops". Players can set up automated shops, listing loot for sale and naming their own gold coin prices.
- New Item: "Settlement War Declaration". Tied to the War System. Drag over a settlement on the ATLAS map to declare war on them!
- New Item: More tame tokens for more mythical creatures! Allowing players to have limited-time tames of the Fire Elemental, Rock Elemental, and Gorgon. BONUS: Rock Elemental and Cyclops are rideable!
- New Feature: War System - Declare war on your enemies!
- New Feature: 1 'Mainline Quest' involving gathering 9 trench stones and defeating the hardmode Kraken!
- New Feature: 7 more ‘Quests’ which upon successful completion will provide their own unique Skill unlock
- New Feature: Curses. Tied to the execution of players
- New Feature: Player-to-Player secure trading system
- New Feature: Procedurally Generated Shipwrecks which players can explore for items and blueprints. They can be found by diving deep into the ocean, or looking out for their visual indicator on the surface of the water, or successfully completing the sextant mini-game which will point you in the direction of nearby shipwrecks.
- New Feature: Human Catapult. Player characters can now be deployed into battle using a catapult.
- New Cosmetics: Peg Legs, Hook Hands, and Multiple Armor sets to customize the look of your company and crew! Can be purchased at the cosmetics vendor.
- Redesign: Squads (Ship) of the Damned will now come in multiple size variations with different stats and difficulty levels.
- Redesign: Grappling Hook has been revamped, better physics & rappelling mechanics, and players will be able to realistically swing using them.
- Redesign: Explosive Barrels. Can now be carried in hand, thrown overboard to sink and will explode when they collide with anything underwater (Depth Charge!).

- The higher quality shipyard used when building a ship, the more level ups a ship will be able to obtain.
- Ships can now level up their total damage output (which effects all cannons on a ship) and their total resistance, as new upgradable stats.
- All tamable creatures made breedable, with no exceptions except for Mythical Creatures.
- Various spawner adjustments & fixes across all islands
- Reloading now changed to have the mini-game appear back to back, rather than through various points of the animation.
- Vitamin debuffs have been removed and will only cause health loss when a player has a vitamin surplus or deficiency.
- Increased smithy inventory slots to 130.
- Increased weight of catapult from 12 to 84.
- Adjusted the crafting quantities on higher tier blueprints so they don't require as many resources as before.

- Territory map will now display allies as teal-coloured
- Character creator now has a Height slider to make it easier to set your character's desired height
- Any dead ships (shipwrecks) from your Company appear with a unique icon on your map now, so you can find the wrecks
- Global territory message updating
- Currently contested claims will be indicated on the minimap
- Players can now mount a sail to directly control the sail's open/close amount and rotation settings in a more intuitive way.
- Toggle ladders button for ship Captain, defaults to L key.
- Company Groups have been increased to 10
- Players cannot accept alliance invites unless they're an admin
- Company Log can now be sorted
- New group permission which acts as an effective 'company owner'. Only the true company owner can set/unset that specific group rank.

Unofficial Server Settings
With this update, we have a treasure trove of settings for unofficial server admins!

If true, you can place all structures without claim flags. We strongly recommend setting this to true if you're using the settlement mode

If true, you are still required to have a claim flag to place cannons even if bDontRequireClaimFlagsForBuilding is true. We strongly recommend setting this to true if you're using the settlement mode

The length of the settlement mode's combat phase

Scales how much gold you get from treasure maps

Scales how long before newly-placed land cannons are allowed to fire. set it to zero to remove this feature.

If true, 'enemies' will be allowed to stand on your ship in PvE

If true and the server is in PvE configuration, player characters will disappear when logged out

If true, player characters on homeservers will disappear when logged out

If greater than zero, ships that have not had any of that team logged-in nearby will be destroyed after that amount of time

If true and NOT playing settlement mode, the list of top 10 companies will be displayed on the map

For these, if non-zero they will scale-limit how many 'island points' a company is allowed to claim with claimflags. In non-settlement "Empires" mode that is simply the total number of claim flags.

For settlement mode, this will scale the amount of upkeep resources necessary in the claim flags. you can set it to 0 to remove the upkeep entirely.

For settlement mode, this is how often (in seconds) players are allowed to adjust the combat schedule for a settlement (edited)

For settlement mode, this is how long a war lasts

For settlement mode, this is the minimum amount of time in the future that a war can be scheduled

For settlement mode, this is the maximum amount of time in the future that a war can be scheduled

For settlement mode, this is the amount of time after a war ends before a new war can be declared

If you set this to true, the fog & shrowd of war will be disabled

If you set this to true, foundation/supports will be more correctly required for horizontal structure building, improving server performance but consequently limiting certain kinds of architectural builds.

If true, for settlement mode, the island points will automatically be calculated by the island's size on the map, for any islands that are set to 1 point

For settlement mode, the period of time that a settlement owner is able to instantly demolish any other settler team's structures during peacetime

For non-settlement mode, the distance away from shore that water claims are allowed to be placed (0 means no limit)

If greater than zero, wild dinos will be automatically destroyed and respawned at this interval if the server has been live this long, to help keep wild dino populations correct. Only recommend using this if bAllowSavingWildDinos=false from the ServerSettings section

We have also updated our ServerGridEditor and island jsons, which can be found on our github. They have been updated for this major release, including some fixes that have occurred over the past few days since the PTR went live. You can grab them here: ServerGridEditor[github.com] & Fixes[github.com]. 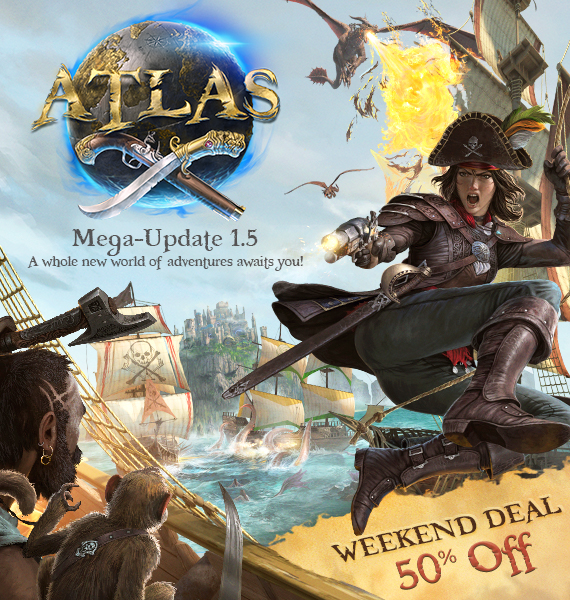 ATLAS is now available on Steam Early Access for the weekend promotional price of $14.99!

Alrighty, that’s it for this log! We hope you enjoy the update, and you can look forward to the DevKit later this weekend!

Thank you so much for becoming a part of our crew and we can't wait to show all you scallywags, landlubbers, captains, and seadogs what lies ahead!