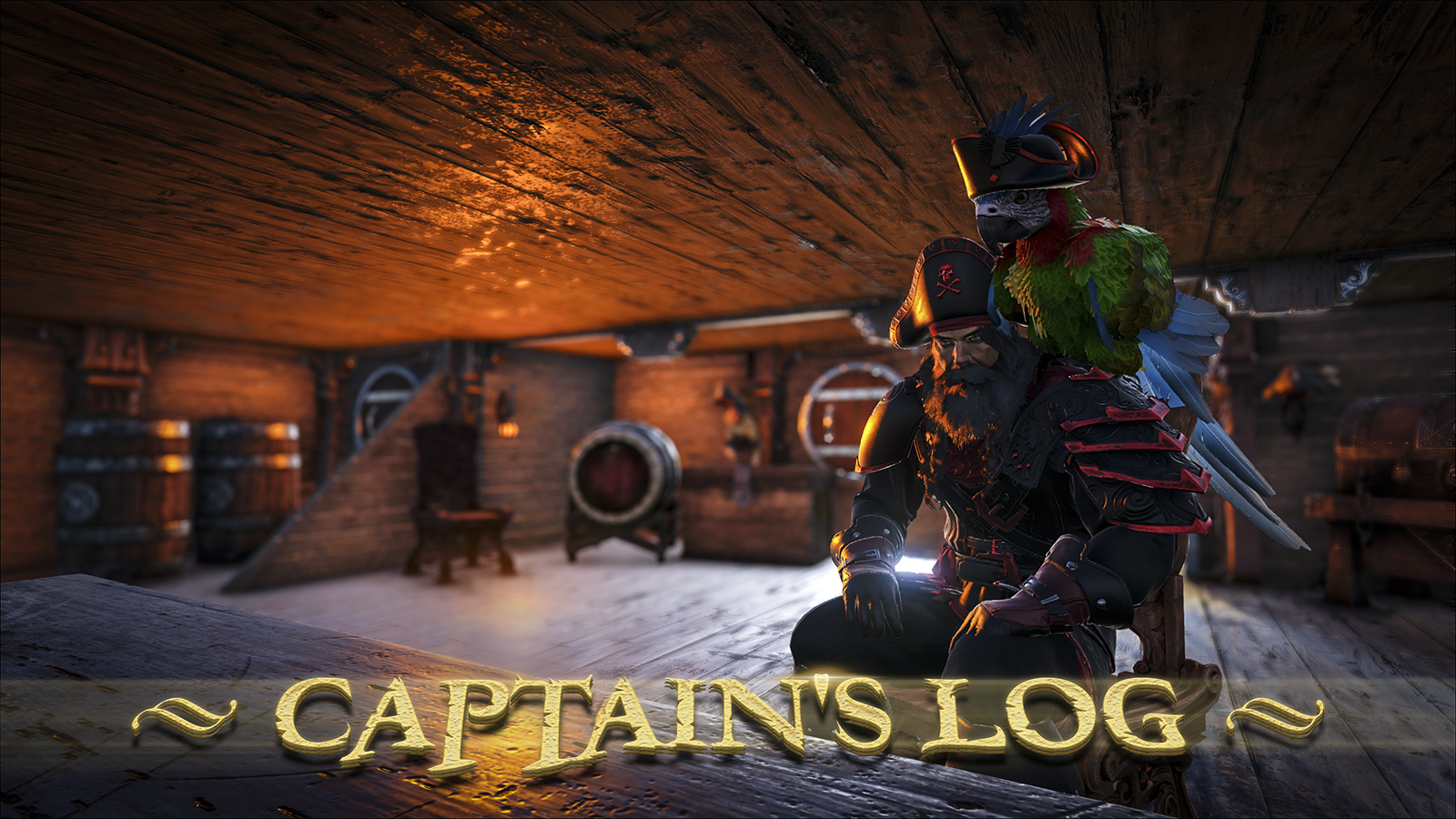 I'm Dollie, your new Community Manager with training wheels. I'm excited to be a part of the team, especially working on an MMO title focused on Pirates! I've enjoyed meeting new people via ATLAS on the Discord & Forums, along with seeing familiar people from the ARK community. You’ll definitely hear more from me on those platforms, as well as on Twitter.

As for my background, I've had extended experience with running communities or operating in a leadership role across various gaming platforms. Some of you may recognize me from the Official ARK PVP community. For those of you who aren't familiar with me -- I come from a competitive PvP background and have a love of FPS, Survival, MOBAs, and MMOs along with quirky lil indie games. Other Dollie funfacts include my penchant for anything post-apocalyptic, suffering from an unhealthy addiction to pistachios and an equally unhealthy repertoire of bad jokes and puns.

Don't hesitate to message me with all of the things and I’ll do my best to get back to you...or I’ll just pile it all onto Jat's desk. Real talk though, I'm looking forward to getting more involved with the Community, I do read all of your messages but I may not always have time to respond to each one. Rest assured, Jat and I, as well as the rest of the team, do take note of everyone’s feedback and with your help, we’ll work together to shape and realise the vision for ATLAS as the ultimate fantasy pirate adventure.

Now on to more exciting topics!

Thar she streams!
On Friday the 18th of January, at 1 PM Pacific Time[www.worldtimebuddy.com], the ATLAS team will be hosting our first ever Developer Livestream! Join our crew at Seattle HQ as they unearth a veritable treasure trove of information and news regarding upcoming content, gameplay changes, and future development plans. You'll want to keep your eyes trained on the waves, or perhaps beneath them, as you might just catch a glint of what's to come!

It's a few days away, so here's a little early look at some upcoming content:

With so much more planned to be revealed live on stream! Seriously, you'll not want to miss out.

We'll also be opening the floor to questions from the Community! You can ask almost anything here on our forums[www.playatlas.com] or on Reddit. We’ll be selecting an assortment of your questions to answer live on stream.

Whether you’re a twitcher or a mixer(er?), you’ll be able to catch us on both platforms at Twitch[twitch.tv] and Mixer[mixer.com]! See ya scallywags then ;)

This week is all about performance! Well, that’s not entirely true, there have been a multitude of various fixes. But we’ve made vast improvements to our networking and server performance on our most intense Official Servers has increased by approximately 20% (an in some cases, more). The team are currently working on additional changes which we hope to be able to deploy later this week which will further improve server performance by approximately 25%. Incidentally, we’re not going to stop there! We’re going to keep hammering on server performance so that your grand Naval Battles can take place on the smoothest seas (unless you’re in a storm, of course :P)

Current Version: v11.3 - Fixed an exploit [details coming later] - Additional backend infrastructure for anti-cheat and hack detection v11.2 - Server performance optimisations (20%+ improvement). We'll have more changes in the week for an additional (approximately) 25% server perf improvement. v11.1 - Enabled BattlEye Anti Cheat on all Official Servers. Please restart your Steam Clients and make sure to install BattlEye in order to play on our Official Network. Unofficial Networks can still play without BattlEye, and players can right-click the title in their Steam Library and play without the anti-cheat. For those of you who have made custom shortcuts, please update the executable to this: ShooterGameBinariesWin64AtlasGame_BE.exe - Implemented code to kill off inactive bodies in Freeports and Lawless Regions (players who have been logged off for more than 10 days). v11 - Re-enabled weapon/attack based feats - Fixed game exploits v10.82 - Temporarily disabled weapon/attack based feats v10.80 - Claim Flag Settings have now been enabled - Taxing Resources now affect crops - Tax Bank will stack items similar to a Crew Resource Box - Tax Bank will no longer allow you to drag item's into the inventory, so to prevent items from being taxed, they must be dragged from within the Tax Bank itself to the ignore folder. - Cost of Drake Token has been reduced to 20,000 Gold Coins and is now available for purchase at the cosmetic vendor in freeports. - 25% buff to explosives against stone structures v10.79 - Changed how custom blueprints are crafted for STACKABLE items when they're given a stat roll: > If a stackable item is crafted from the same blueprint and you already have an item crafted from that blueprint in your inventory, it will stack on that pre-existing item and not receive a different Intelligence Stat Bonus. > If you want a different roll from the same blueprint, you must make sure that you do not have an item which was crafted from that same BP in your inventory (stated or non) > This means that you can keep rolls by keeping the item in your inventory when crafting from the BP, even if you do not have the level of intelligence required to get the crafting bonus. Alternatively, you can remove the stated item from your inventory to get a new roll from the BP. - Resource respawn should now function as they did on Lawless servers prior to v10. - 50% reduction in the enemy structure prevention radius so that you can now build closer together on Lawless Servers. v10.75 - Wild land creatures will no longer target crew, tames, or characters on ships unless they have been aggro'd - Fixed a bug where Ship of the Damned would have rapid fire - Temporarily reduced Crew Log length as it undergoes some rewrites because it would cause performance problems. v10.71 - Fixed a bug which prevented cannons from being reloaded - Tightened up server-side protection on gliders - Fixed an exploit with mortars v10.5 - Fixed Ramshackle sloops breaking when you leave freeports - Fixed a bug which prevented you from accessing newly tamed inventories unless you relogged - Fixed a bug which caused Mantrays to be unusually aggressive - Commodity trader gold cost increased
We’re going to continue repeating this: it's just the very beginning of our journey. You can expect frequent major (and minor) patches multiple times each week to improve the state of the game - including exploit and bug fixes, QOL improvements, balance and design changes and new content and features. You will always have something to look forward to and the team are already working on some major content & feature additions in tangent with our frequent live game patches, so be sure to tune into Friday’s Stream for more details on that!

Sinking Cheaters!
In our previous Captain’s Log, we expressed how much of an internal priority it was to crack down on cheaters, exploits and general foulness. We planned out a 3 step process:


Since that initial announcement, we have completed the process. We’ll be continuing to work on our anti-cheat measures, including detecting tools, patching out exploits, and expanding our team to tackle cheaters. There will be no room for them on our network. Over the coming days you’ll likely see a number of complaints regarding bans and, should they be necessary, Company wipes. Cheating will not be tolerated on our servers, that said, please make sure you’re using our reporting tools to alert us of those whom you suspect are playing unfairly. None of our decisions regarding bans and/or wipes are taken lightly. We’ll always aim to be thorough with our investigations. Additionally, as a studio, we’ll continue to funnel resources into dealing with exploits and problems via technical implementation as well as through the efforts of our Game Masters.

Devkit Ho
It’s nearly here! Yes, I know we’ve been saying that for a while but this time we’re so close. We expect to be ready to have the devkit available for pathfinders to download on Thursday or Friday this week. For those of you who have experience working with some of our kits, the ATLAS kit is more robust than anything you would have used prior. It will include a new more powerful map-extensions-type functionality so you'll have a lot of options when creating your server grid. This will facilitate COMBINING multiple Steam Workshop maps ("islands") together in your overall Server Grid OR you can just replace the entire persistent level with a new map. We're excited to get that into your hands and check out all the amazing content you produce.

Dynamic ATLAS Maps Round-Up
The ATLAS Dynamic Maps is a system that monitors live in-game territory ownership and indicates which companies dominate over the lands. 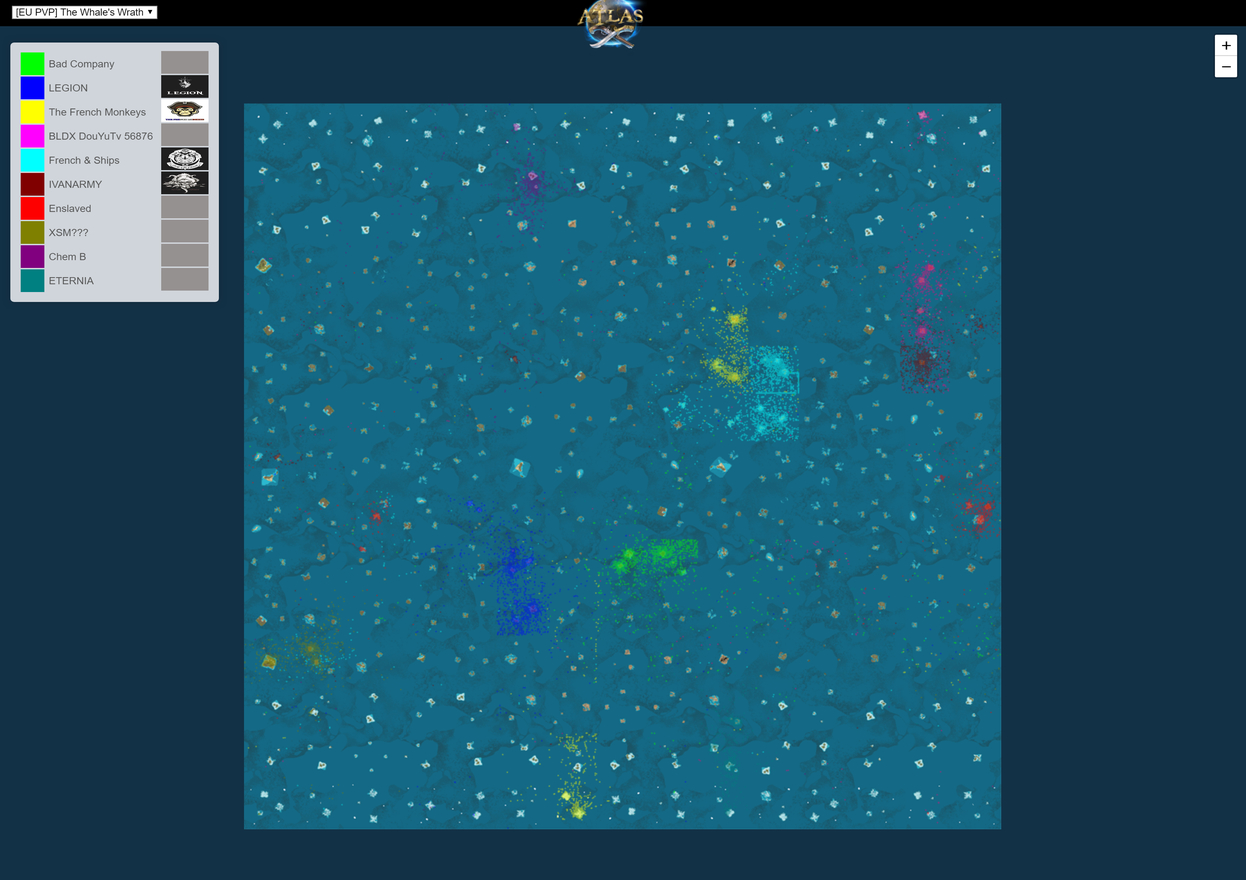 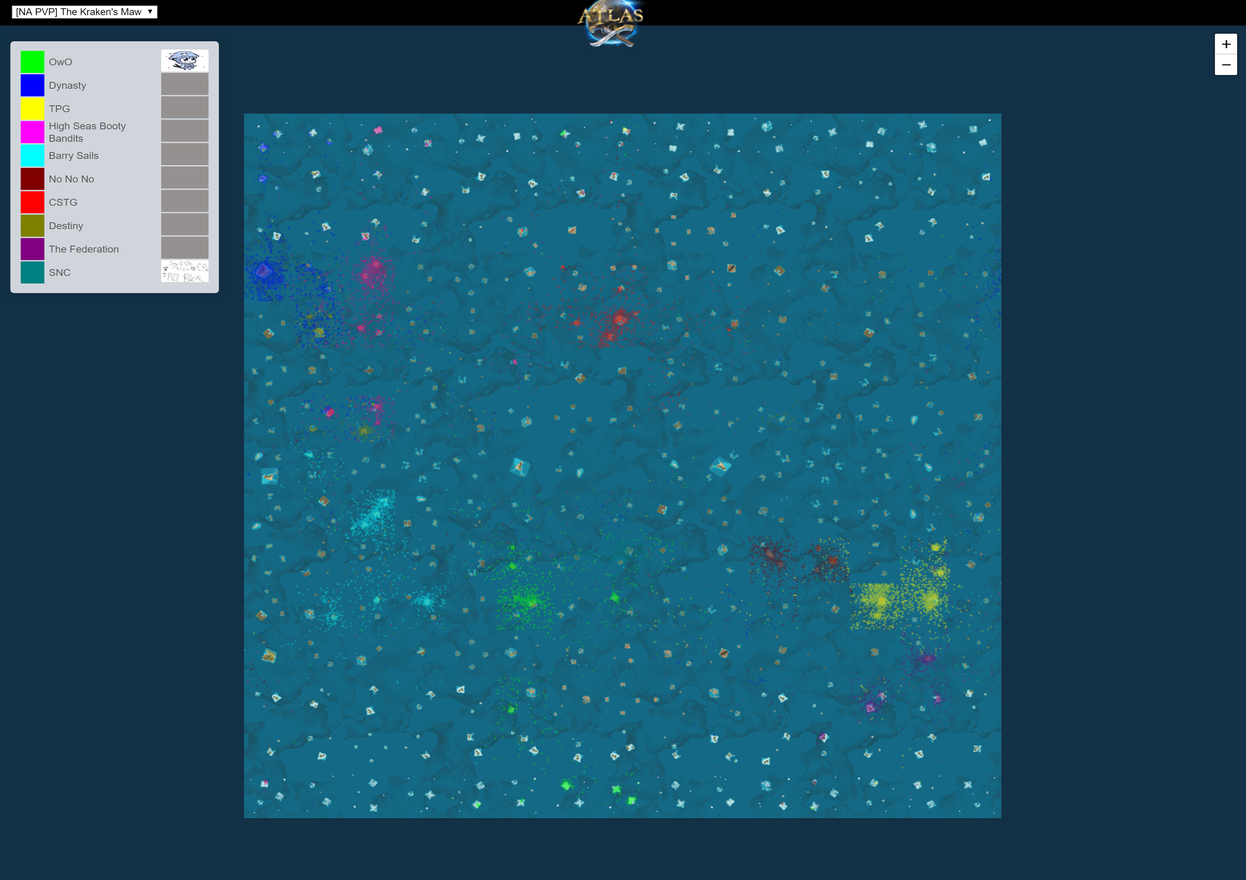 Arrivals: SNC, No No No, and Destiny

Departures: Order of Freedom, Darkblade Army, and The Late Shift 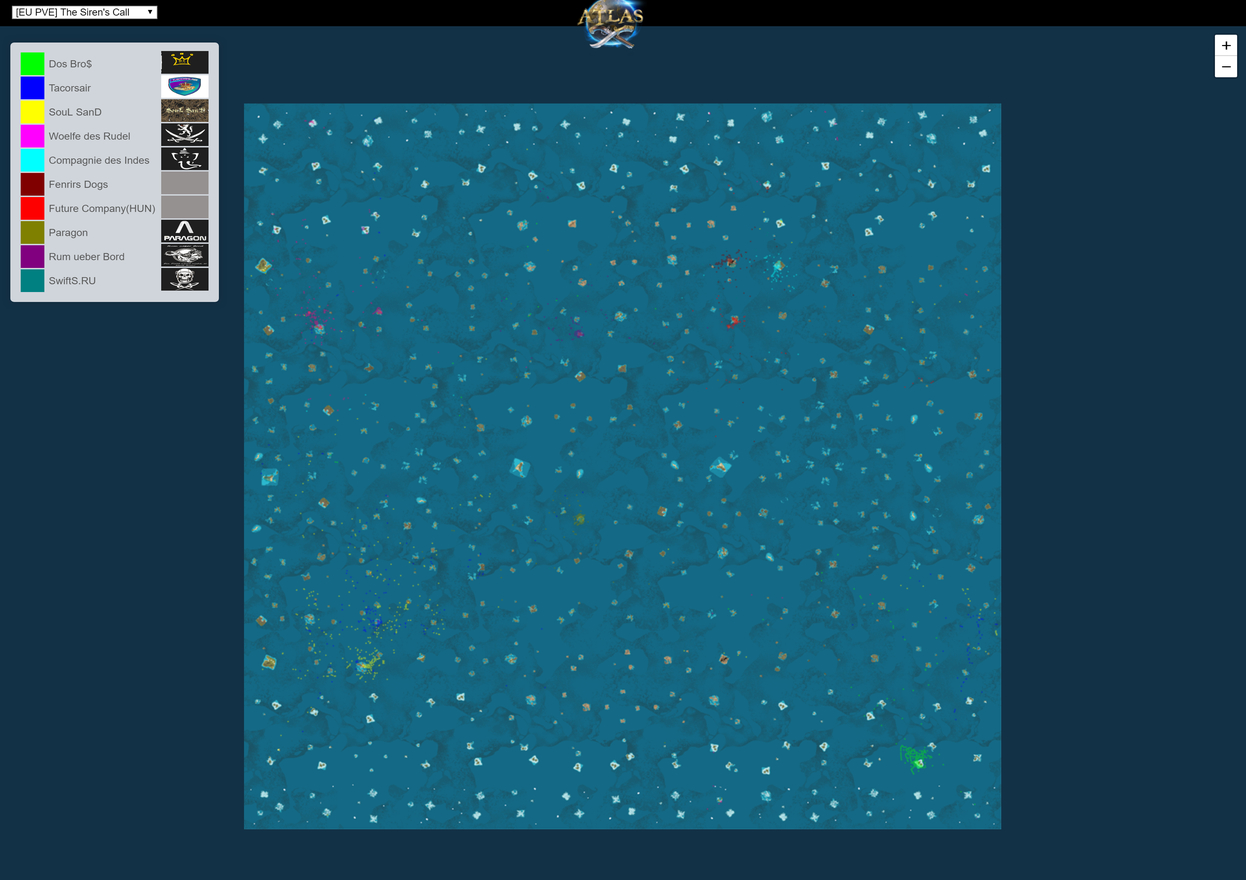 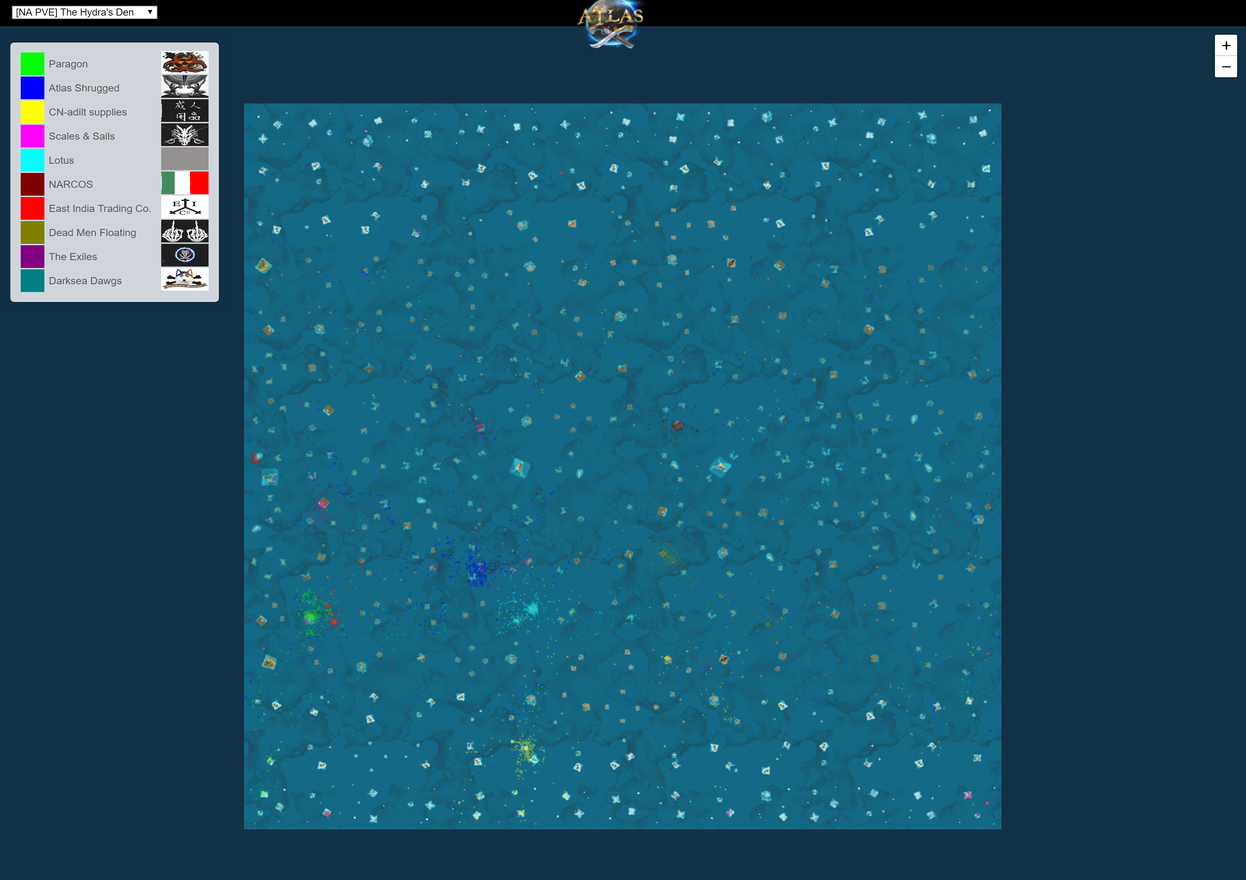 Departures: Plunderers and The Salty Seamen.

Show ‘n Tell #2!
Check out our PlayATLAS announcement to see the results of our second Show 'n Tell contest![www.playatlas.com]