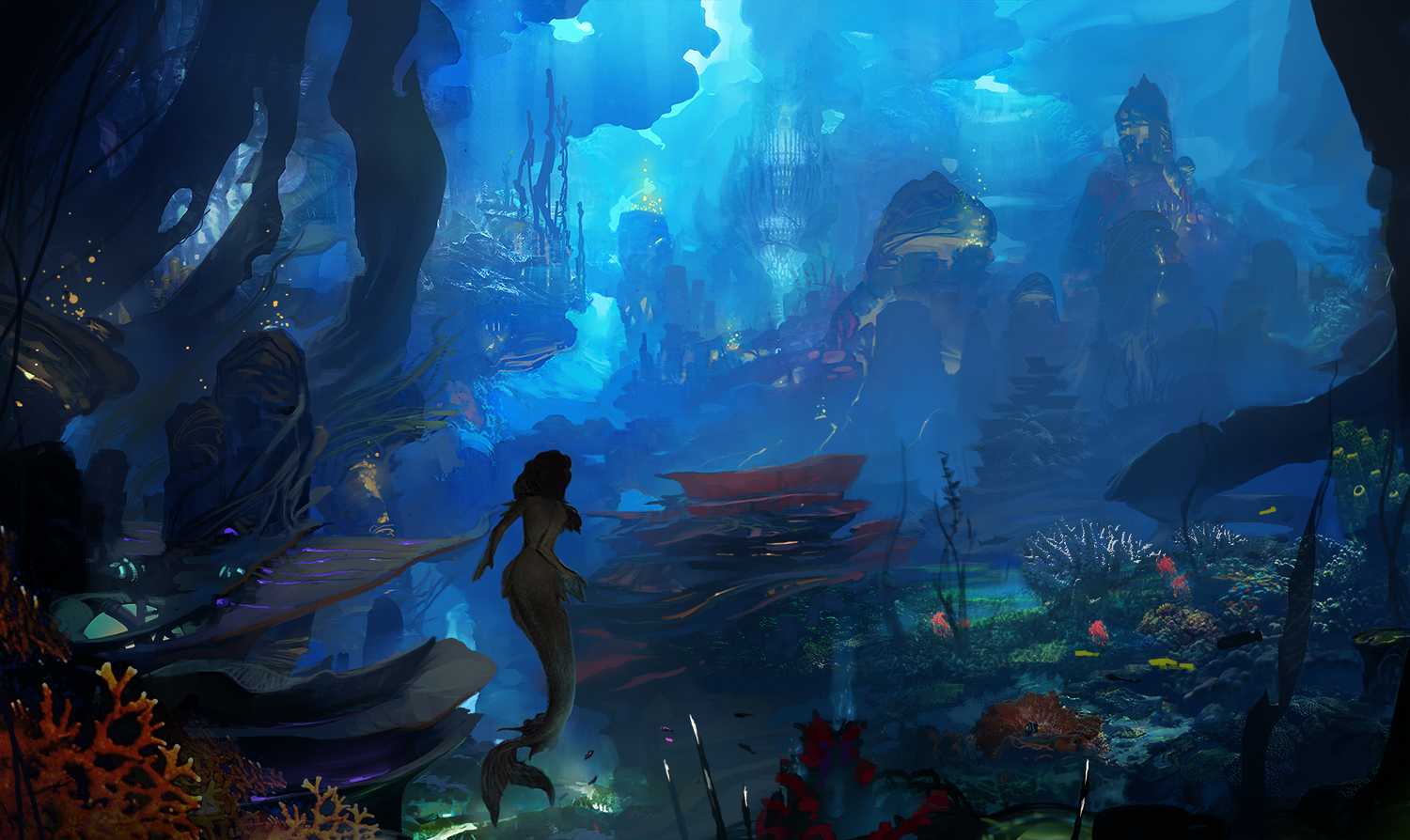 It's your Co-Captain back again with my trusty bag of pistachios and bad Dad jokes (although I'll restrain myself in relation to the latter this once). We’ve prepared a hearty edition of the Captain’s Log to make up for last week’s absence. There is a load of information, updates, and glimpses of what’s to come to share with you! In this Captain’s Log, we will be taking a look at what has been implemented over the past fortnight along with a view of what’s on the horizon for the weeks ahead including some key changes to design aspects of the game.

In an earlier Captain’s Log, we announced that we would be making changes to the game which reduce the steepness of the climb necessary to experience some of the later game content. We want to reduce how punishing ATLAS is, especially to solo players and smaller groups, and ensure that those who cannot invest as much time are still able to experience the fun that ATLAS has to offer.

We’ve begun that process with our recent minor updates which have incorporated changes to weight, structures, QOL improvements and small tweaks to creatures. However, we recognize that there is still a lot more that needs to change, including revisiting some major design aspects of the game. It is for that reason, we’ll be delaying the February Content update to Mid/Late March so we can include some of these major changes.

First of all, we’ll be revamping the Land Claim/Ownership System. We recognize that for a lot of players, land is incredibly difficult to get, and in some cases impossible, unless you’re in a lawless zone or playing with a large group. This is something we’re planning on addressing by introducing some new mechanisms related to land claiming, such as upkeep, as well as some possible limitations which we’ll be able to cover precisely in the next Captain’s Log, as we’re still hashing out the details.

The next aspect we’d like to tackle and include in this March update is defense against ‘offline raiding’. This is something that has often been echoed around the community as being a critical problem with the game. Players are unable to enjoy PvP versus one another because the meta encourages/enables offline raiding through how easy and effective it is. Our plan is to introduce game mechanics which will funnel PvP taking place during online hours and the overall objective is to provide players more power and defensive options over their land.

These are two major systems that will be receiving attention from our development team over the coming weeks so we can have them ready to launch in tandem with the aforementioned changes in March. We’ll also be including some additional QOL changes, first pass adjustments to the vitamins system, Companies and other aspects of the game based on recent feedback. You can look forward to the specifics of those changes in the next Captain’s Log where we’ll share the full updated patch notes, including the revamp of the Claim System and how we want to deal with the offline raid meta.

Public Test Realm
As we get closer to the release of this update, we’ll be deploying the changes in advance on a publicly accessible test network before it hits the Official Network. We’ll be iterating based on the feedback and reports you guys make, ensuring that we’re able to deal with any critical concerns prior to the update hitting our live servers. Additionally, we’d also like to use this network for some of our more regular updates too. Most hotfixes will still go through our internal processes before they’re pushed live, but when it comes to the more widespread/impactful changes, whether balance or fixes, we may look to deploy them onto this network for players to experience first hand in a test environment.

Please note that these servers won’t be considered ‘stable’, and therefore could be wiped at any given moment. We’ll likely set them up as multiple smaller clusters, and have tweaked rates on them to account for the fact that it won’t be as large of a network, have as many players, and playtime being minimized.

Prepare for a dark twist on the Equatorial biome with ISO Blackwood. Dark jungles, caves, alcoves, villages, homes, and farms, an interesting array of animals and a new concept; The Mire. Wade through thick green waters teeming with dangerous creatures, rare plant life and the occasional Gorgon to find buried treasure, lost corpses and even the giant and ancient snake boss Anacython.

The mega content update to drop in March will also include an alpha release of ISO Blackwood (from the creator of the popular ARK mod, ISO Crystal Isles). This will be a standalone map which players can host on a single server and still experience all that ATLAS has to offer!

Creature Feedback
Following (or alongside) the upcoming update, we’d like to take a pass at the creatures we’ve currently implemented and are presently seeking feedback related to them! If you’d like to suggest some changes, especially if it’s related to their abilities/perks, then please do so here:

We wanted to tackle concerns players had in regards to QOL along with overall balance and we implemented some key aspects of that in our v18.84 patch. We have made interesting design choices at times and realised it would be good to take a step and back and observe how some of those aspects were playing out on a grand scale.

Taking a look at weight in general was a focus and we made some sweeping changes to the weight of all items and resources as well as providing buffs to weight capacity in some specific ways. Balance in relation to defense was also on the agenda, with built structures being given resistance buffs along with some a new defensive mechanism for anchored boats. We'll continue to monitor PvP balance moving forward and make further adjustments as we deem necessary. Creatures were also given some love in an initial pass and, as mentioned elsewhere in this Log, we are currently taking feedback on creatures that we will utilize in tandem with our plans moving forward. General QOL changes also included the Fountain Of Youth (pending a redesign in the future), a respec option, and skillpoints among others.

Who will come to dominate the ATLAS may very well become clear in the days and weeks ahead, though maintaining a large Empire will likely come with its own longer-term challenges…

Soon, the companies that have occupied islands for a certain period of time will gain the automatic privilege to name them on the in-game and web maps, as it is their land! 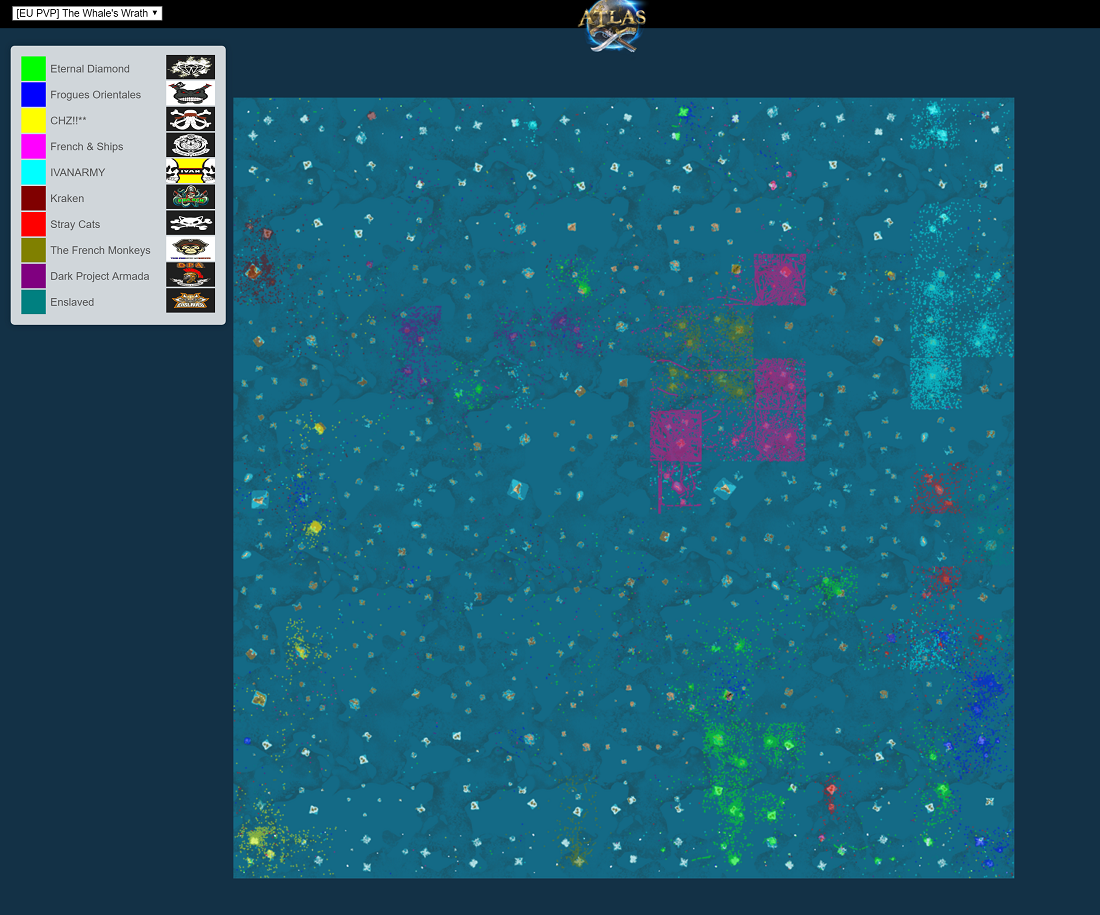 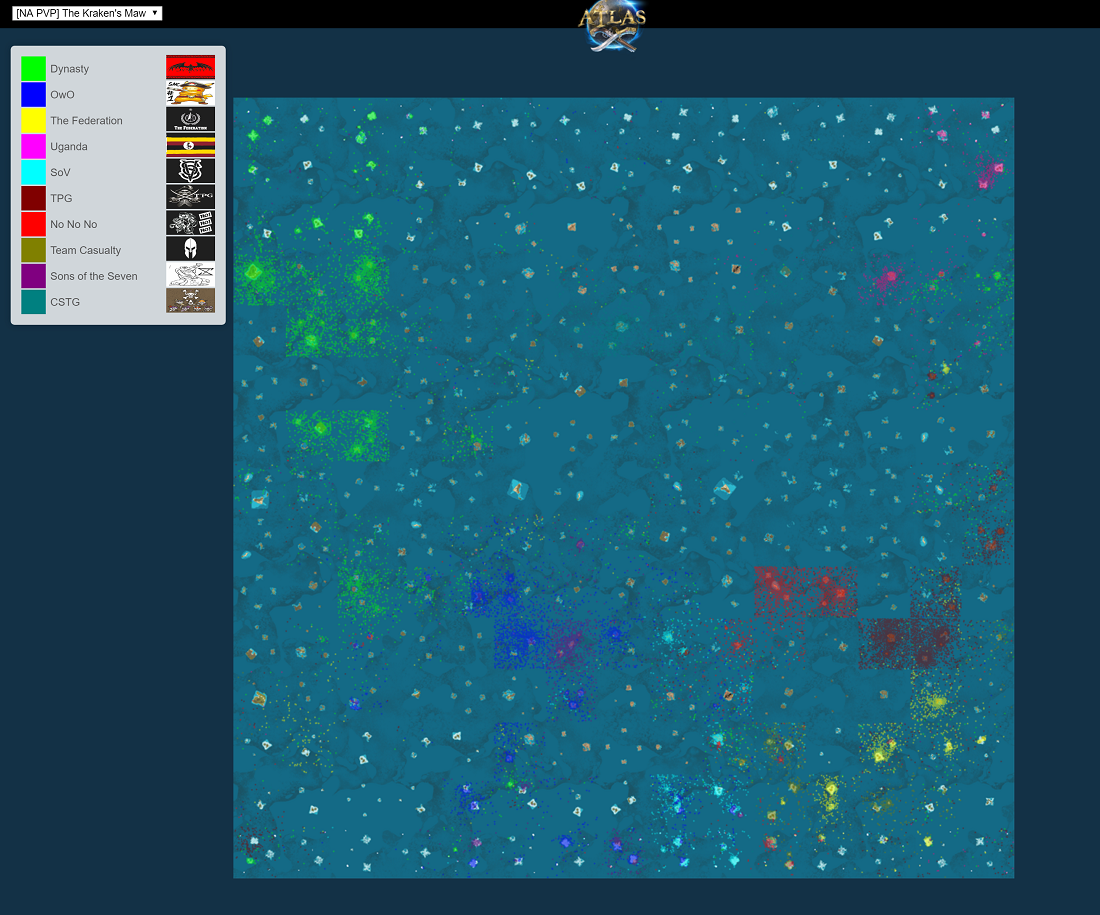 Held: Dynasty, TPG, CSTG, OwO, The Federation, and No No No.

Arrivals: Uganda, SoV, Sons of the Seven, and Team Casualty. 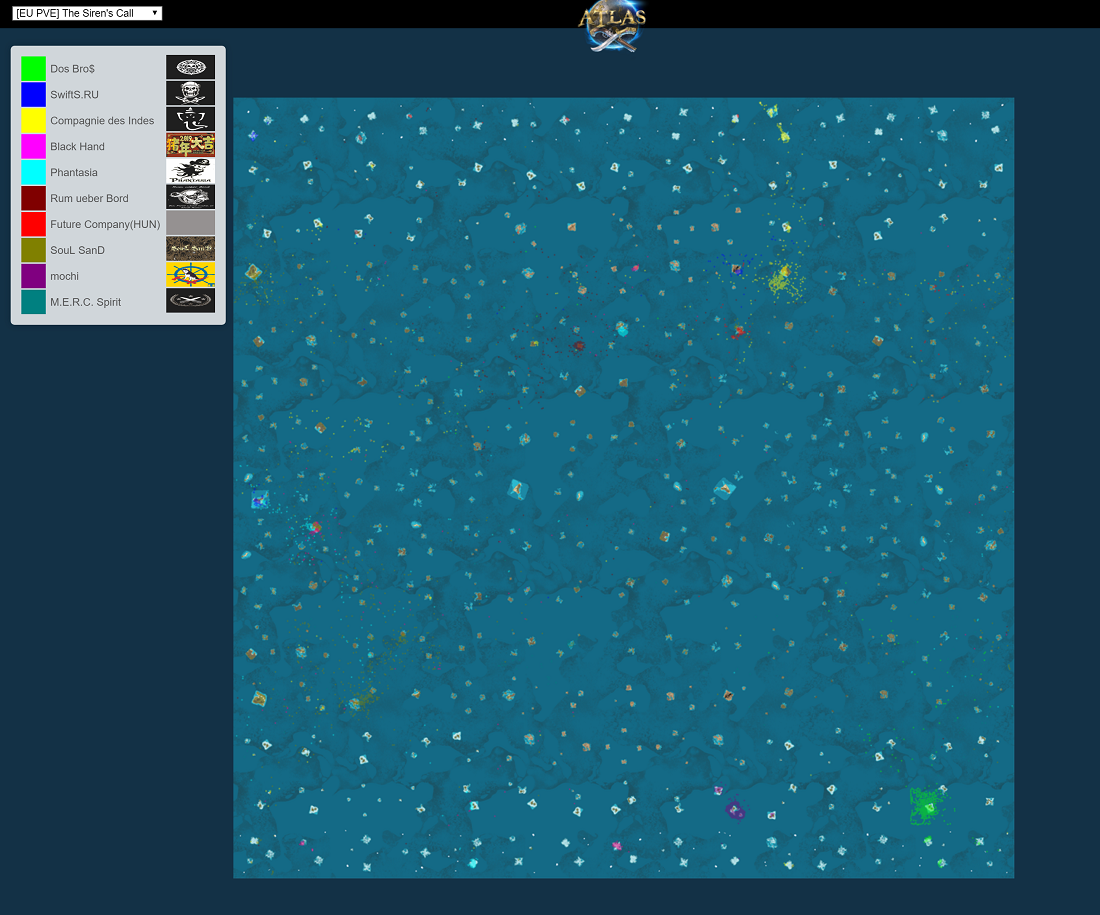 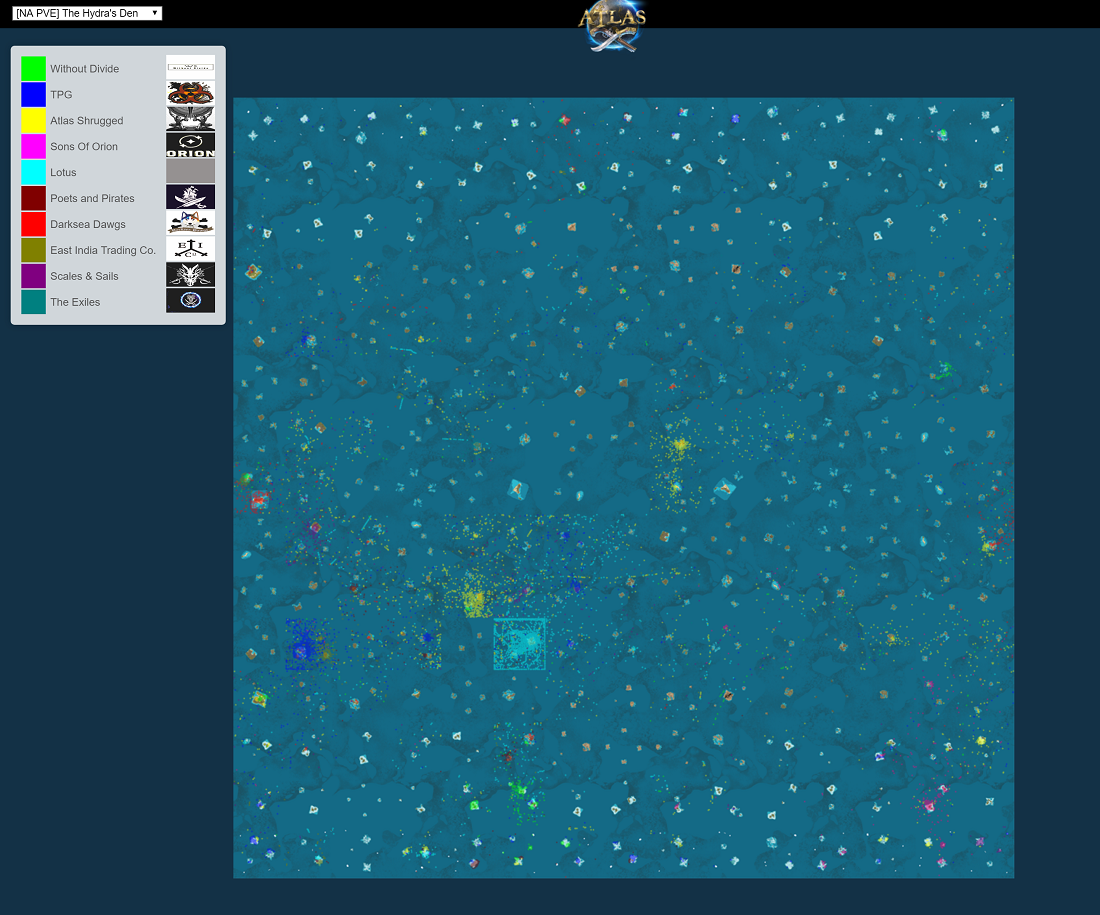 Show ‘n Tell #4!
We saw an impressive array of submissions in this edition of Show 'n Tell. It's awesome to see all of your creativity and talent. Feast yer eyes on th' best o' th' bunch by heading to our Community Hub!